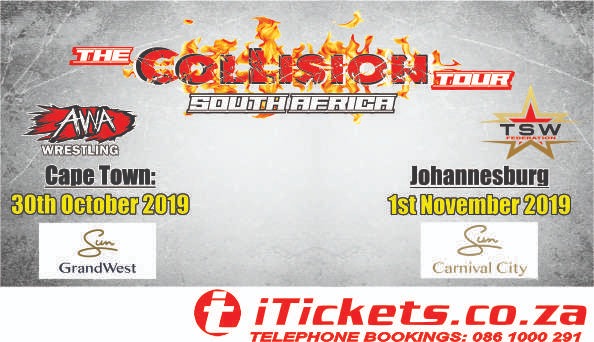 The Africa Wrestling Alliance (AWA) in conjunction with Top Stars Wrestling (TSW) is proud to present the COLLISION TOUR. The best of AWA will take on the best of TSW when two worlds collide!

See AWA stars Johnny Palazzio, "Mad" Jack-Maverick, Steve Eden, Little Hillbilly, Mike Xander and more take on the best of TSW talent. Johnny, Mad Jack, Steve and Hillbilly are all veterans of the squared circle and have experience wrestling all over South Africa. Mike Xander is a new and upcoming South African wrestler, who has just returned from wrestling in the USA based federation, FEW and trained with wrestling greats like The Headbangers and "The Pope" Elijah Burke.

TSW will be bringing a world class roster, which will consist of wrestlers from all over the globe who have experience wrestling in top federations such as WWE NXT, TNA/Impact Wrestling and New Japan Pro Wrestling (NJPW). These will include the AWA All Africa Heavyweight Champion, Congo King and 2nd generation wrestling star, Wes Brisco.

Congo King has been on a warpath recently, having dethroned Johnny Palazzio of the AWA All Africa Heavyweight Championship. He's looking to show the world that Congolese wrestling is the best. Who will dare challenge him for championship on the tour?

Wes Brisco is the son of Gerald Brisco and nephew of NWA Heavyweight Champion, Jack Brisco (both known as the infamous tag team, The Brisco Brothers). Wes has won championship gold all over the world and has even beaten wrestling legend, Kurt Angle in a steel cage match.

There will also be a match featuring top female wrestlers that will be confirmed soon!

This massive event promises to be an action packed show for the whole family and will be taking place live at the Grand Arena, GrandWest Casino in Cape Town on 30 October.

We're having an early bird special!
Buy 5 tickets and get a 6th one for FREE in September! So get your family and friends together and save some money!

Doors open at 6pm and the show starts at 8pm.

*Wrestlers and matches are subject to change.